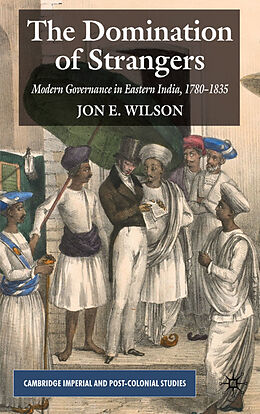 The Domination of Strangers

Offering a major new interpretation of the transformation of political thought and practice in colonial India, The Domination of Strangers traces the origins of modern ideas about the state and Indian civil society to the practical interaction between the British and their south Asian subjects.

'Innovative and stimulating...The Domination of Strangers is a remarkably evocative book. Its methodological suggestiveness both in its particular understanding of what marks a 'modern' state as well as its arguments that the history of political thought must attend not just to abstract philosophy or to its reception, but to the ideas produced out of political practice of those in the middle who did the governing - will make it quite stimulating reading both within colonial history and beyond it.' Philip Stern, Reviews in History

'This elegantly written and thought-provoking book opens up new perspectives on changes in colonial governance in late eighteenth and early nineteenth century Eastern India. Innovatively applying a reading of Georg Simmel's essay on 'The Stranger' to the colonial context in India, it characterises these changes in terms of ambivalent and contradictory responses to a practical and semantic crisis in the East India Company's relations with Eastern Indian society. This important book also sheds new light on other areas of debate (such as the Anglicist-Orientalist controversy) by relocating these in the context of this crisis of governance. In addition, it brings its conclusions to bear on a wider comparative framework that discusses the differences and similarities between non-colonial regimes in continental Europe and Britain, and the colonial regime in India. As such, its breadth of perspective combined with focussed archival readings will appeal to historians of both modern South Asia and Britain, and to those who are interested in the issue of modern governance as a whole.'

Autorentext
JON E WILSON  is Lecturer in History at King's College London. He has degrees in both history and anthropology. His research focuses on the history of modern South Asia, especially Bengal, its relationship to global social and intellectual forces and their contemporary political and philosophical implications.

Titel
The Domination of Strangers