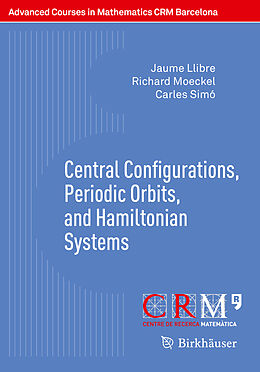 The notes of this book originate from three series of lectures given at the Centre de Recerca Matemàtica (CRM) in Barcelona. The first one is dedicated to the study of periodic solutions of autonomous differential systems in R n via the Averaging Theory and was delivered by Jaume Llibre. The second one, given by Richard Moeckel, focusses on methods for studying Central Configurations. The last one, by Carles Simó, describes the main mechanisms leading to a fairly global description of the dynamics in conservative systems.
The book is directed towards graduate students and researchers interested in dynamical systems, in particular in the conservative case, and aims at facilitating the understanding of dynamics of specific models. The results presented and the tools introduced in this book include a large range of applications.

Autorentext
Jaume Llibre is full professor at the Autonomous University of Barcelona (Spain) and a member of the Royal Academy of Sciences and Arts of Barcelona. He was a long-term visitor at different important universities and research institutes and is the author of many papers and some books. His main results deal with the periodic orbits either of different kinds of self-maps, or of vector fields, Hamiltonian systems and celestial mechanics.