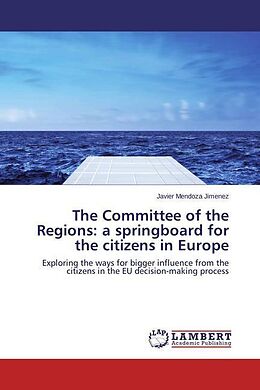 The Committee of the Regions: a springboard for the citizens in Europe

In times when the debate about the model of the EU arises, this book discusses the role of the Committee of the Regions (CoR), an advisory body of the European Union which defines itself as the political assembly of holders of a regional or local electoral mandate, in tackling the democratic deficit and enhance the citizens involvement in the decision-making process. The initial hypothesis is that the CoR is an unknown institution that could play a much decisive role due to its unique position inside the EU structure. The opportunities and limitations for this have been studied in order to give a clear vision about the current situation and the influence of the CoR. After that, potential actions are addressed aiming to give this institution a bigger and better relevance and engagement with the citizens.

Javier Mendoza Jimenez, finished the Master in European Studies at the University of Latvia where he has worked as a teacher. He has published articles in different fields like International Students, Tourism; and the use of music in teaching. He is a member of AEGEE EUROPE, where he is content manager of the Y vote project for youth participation.

Titel
The Committee of the Regions: a springboard for the citizens in Europe