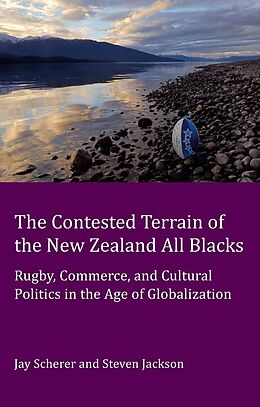 The Contested Terrain of the New Zealand All Blacks

In 2011, New Zealand rugby fans erupted in celebration as the All Blacks narrowly defeated France to win the Rugby World Cup - the team's first title since New Zealand hosted the inaugural tournament in 1987. In the years between these victories, the sport of rugby has been radically transformed from its amateur roots to a professional, global entertainment 'product'. This book explores these developments and focuses initially on the New Zealand Rugby Union's key deals with Rupert Murdoch's News Corporation and global sportswear giant Adidas in the 1990s. The new pay-per-view era has curtailed the traditional 'viewing rights' of rugby fans to have live, free-to-air access to All Blacks test matches on public television. Adidas, meanwhile, has relentlessly commodified aspects of national heritage and indigenous identity in pursuit of local and global markets while exploiting labour in developing countries. Escalating merchandise costs and ticket prices have, at the same time, pushed the sport further out of the reach of ordinary New Zealanders. All of these issues, however, have not gone uncontested, and the authors argue that rugby remains a contested terrain in the face of a new set of limits and pressures in the global economy.

Jay Scherer (PhD, University of Otago) is an Associate Professor in the Faculty of Physical Education and Recreation at the University of Alberta. His research focuses on cultural studies of sport and leisure and globalization, sport, and public policy. He is co-editor (with David Rowe) of Sport, Public Broadcasting, and Cultural Citizenship: Signal Lost? (2013).
Steven Jackson (PhD, University of Illinois) is a Professor in the School of Physical Education, Sport & Exercise Sciences at the University of Otago, New Zealand and Visiting Professor at the University of Johannesburg, South Africa. Currently the past-President of the International Sociology of Sport Association (ISSA), his research focuses on globalization, media, and national identity. He is co-editor of Sport, Culture & Advertising (2005), Sport & Foreign Policy in a Globalising World (2008) and Sport, Beer & Gender: Promotional Culture & Everyday Social Life (2009).

Contents: Globalization, Corporate Nationalism and the Re-imaging of National Sporting Mythologies - Critical Theory, Advertising and the New Cultural Economy - The Media Sports Cultural Complex and the Adidasification of the New Zealand All Blacks - Public Broadcasting, Sport and Cultural Citizenship: Sky's The Limit in New Zealand - Branding the Nation: Corporate Nationalism and the New Cultural Economy of the All Blacks - The Ka Mate Haka, Adidas and the Circuit of Culture - From Ka Mate to Kapa o Pango: Haka as Contested Terrain - Engaging Adidas's 'Beat Rugby' Campaign: Globalization, Promotional Culture and the Production/Consumption of Online Games - Producing allblacks.com: Cultural Intermediaries and the Policing of Electronic Spaces of Sporting Consumption.

Titel
The Contested Terrain of the New Zealand All Blacks

Untertitel
Rugby, Commerce, and Cultural Politics in the Age of Globalization