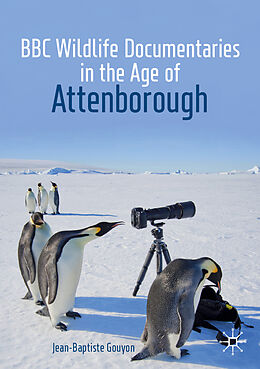 BBC Wildlife Documentaries in the Age of Attenborough

This book explores the history of wildlife television in post-war Britain. It revolves around the role of David Attenborough, whose career as a broadcaster and natural history filmmaker has shaped British wildlife television. The book discusses aspects of Attenborough's professional biography and also explores elements of the institutional history of the BBCfrom the early 1960s, when it was at its most powerful, to the 2000s, when its future is uncertain. It focuses primarily on the wildlife 'making-of' documentary genre, which is used to trace how television progressively became a participant in the production of knowledge about nature. With the inclusion of analysis of television programmes, first-hand accounts, BBC archival material and, most notably, interviews with David Attenborough, this volume follows the development of the professional culture of wildlife broadcasting as it has been portrayed in public. It will be of interest to wildlife television amateurs, historians of British television and students in science communication.

Offers a unique look at 'making of' wildlife documentaries

Based on first-hand interviews conducted with David Attenborough

Tells the full story of BBC wildlife and David Attenborough

Autorentext
Jean-Baptiste Gouyon is Associate Professor in Science Communication at UCL Department of Science and Technology Studies, UK, and Research Associate of the Science Museum, in London, UK. A historian of science in visual media, his research is on science in films, on television, and in museums. He is a member of the editorial board of the journal Public Understanding of Science, where he edits the rubric historical moments in public understanding of science.

1. Introduction.- 2. Live from Alexandra Palace, wildlife comes to television.- 3. David Attenborough: the early years. Fashioning zoological expertise on screen.- 4. Wildlife television, empathy and the end of the British Empire.- 5. Wildlife television and progressivism in 1960s Britain. Rise of the professional broadcaster and downfall of the amateur naturalist filmmaker.- 6. Showcasing science, showcasing nature on BBC2.- 7. From Oxford to Bristol and back. the invention of scientific wildlife television.- 8. Oxford Scientific Films. From fieldcraft to filmcraft.- 9. Life on Earth and beyond. Producing the wildlife blockbuster.- 10. Afterword.

Titel
BBC Wildlife Documentaries in the Age of Attenborough