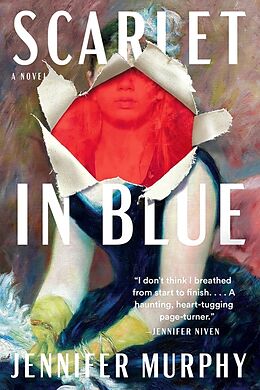 Autorentext
Jennifer Murphy holds an MFA in painting from the University of Denver and an MFA in creative writing from the University of Washington. She is the recipient of the 2013 Loren D. Milliman Scholarship for creative writing and was a contributor at the Bread Loaf Writers’ Conference from 2008 through 2012. In 2015, her acclaimed debut novel, I Love You More (Doubleday, 2014), won the prestigious Nancy Pearl Fiction Award. Her love of art led her to start Citi Arts, a public art and urban planning company that has created public art master plans for airports, transit facilities, streetscapes, and cities nationwide. She hails from a small beachfront town in Michigan and has lived in Denver, Charlotte, Seattle, and Charleston. She currently lives in Houston, Texas.

A beautiful and gripping psychological novel about a mother and daughter who, after a lifetime on the run from a dark and dangerous past, land in a small Michigan town that may hold the key to ending their fugitive lifestyle.

For Blue Lake's entire life, she and her mother, Scarlet, have been on the run from HIM-the man who Scarlet, a talented and enigmatic painter, insists is chasing them. But now, at fifteen years old, Blue has begun to resent the nomadic life that once seemed like an adventure, increasingly unsure what to make of the phantom pursuer she's never seen. She only yearns to settle down in one place, to live a normal life.

When Scarlet and Blue arrive in the beachfront town of South Haven, Michigan, it seems that Blue's wishes might finally come true. She makes a good friend, is falling in love for the first time, and has found a piano teacher who recognizes her budding talent. But even as Blue thrives, she cannot shake her worry about her mother, whose eccentricities and art are only becoming increasingly difficult to understand. Scarlet, meanwhile, has very different intentions for their stay in South Haven. It was no accident that she brought them there and, with the help of the psychoanalyst she's sought out, Henry, she is determined to find a way to finally escape the shadow of her traumatic past, no matter the cost.

Told through the alternating voices of Blue, Scarlet, and Henry, Scarlet in Blue is a page-turning story about the ramifications of past trauma, the way art can hold our lives together, and, most of all, the enduring bond between mother and child.