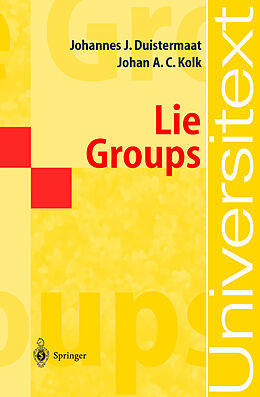 This book is devoted to an exposition of the theory of finite-dimensional Lie groups and Lie algebras, which is a beautiful and central topic in modern mathematics. At the end of the nineteenth century this theory came to life in the works of Sophus Lie. It had its origins in Lie's idea of applying Galois theory to differential equations and in Klein's "Erlanger Programm" of treat ing symmetry groups as the fundamental objects in geometry. Lie's approach to many problems of analysis and geometry was mainly local, that is, valid in local coordinate systems only. At the beginning of the twentieth century E. Cartan and Weyl began a systematic treatment of the global aspects of Lie's theory. Since then this theory has ramified tremendously and now, as the twentieth century is coming to a close, its concepts and methods pervade mathematics and theoretical physics. Despite the plethora of books devoted to Lie groups and Lie algebras we feel there is justification for a text that puts emphasis on Lie's principal idea, namely, geometry treated by a blend of algebra and analysis. Lie groups are geometrical objects whose structure can be described conveniently in terms of group actions and fiber bundles. Therefore our point of view is mainly differential geometrical. We have made no attempt to discuss systematically the theory of infinite-dimensional Lie groups and Lie algebras, which is cur rently an active area of research. We now give a short description of the contents of each chapter.

This book is a (post)graduate textbook on Lie groups and Lie algebras.Its aim is to give a broad introduction to the field with an emphasis on using differential-geometrical methods, in the spirit of Lie himself. A review of the required background material is provided in the appendices.

Hans Duistermaat was a geometric analyst, who unexpectedly passed away in March 2010. His research encompassed many different areas in mathematics: ordinary differential equations, classical mechanics, discrete integrable systems, Fourier integral operators and their application to partial differential equations and spectral problems, singularities of mappings, harmonic analysis on semisimple Lie groups, symplectic differential geometry, and algebraic geometry. He was (co-)author of eleven books. Duistermaat was affiliated to the Mathematical Institute of Utrecht University since 1974 as a Professor of Pure and Applied Mathematics. During the last five years he was honored with a special professorship at Utrecht University endowed by the Royal Netherlands Academy of Arts and Sciences. He was also a member of the Academy since 1982. He had 23 PhD students. Johan Kolk published about harmonic analysis on semisimple Lie groups, the theory of distributions, and classical analysis. Jointly with Duistermaat he has written four books: besides the present one, on Lie groups, and on multidimensional real analysis. Until his retirement in 2009, he was affiliated to the Mathematical Institute of Utrecht University. For more information, see http://www.staff.science.uu.nl/~kolk0101/