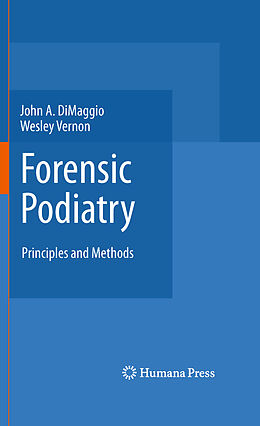 Footwear and pedal evidence have become valuable in forensic investigations. This is the first textbook ever dedicated to forensic podiatry. It is an international compilation of current practices authored by pioneers in the field. It includes case studies.

The human foot is a complex body part composed of fifty-two bones, which is twenty-five percent of all the bones in the body. Nonetheless, the foot is often viewed by the public and doctors as a minor body part. Similarly, the importance of pedal evidence in crime investigation has also long been undervalued, but as footwear evidence has become more commonly used in forensic situations, so has pedal evidence, which is why this seminal work is so important: it is the first textbook ever dedicated to forensic podiatry. Forensic Podiatry is an international compilation of current practices authored by the pioneers in the field. Part I discusses general forensic concerns, including those at the crime scene, from an informative perspective. It covers tasks performed by the crime laboratory, forensic podiatry principles, and various aspects of human identification. Part II deals with specific forensic podiatric concerns such as photographic techniques, bare footprint identification, and footwear examination and analysis. It also discusses forensic gate and analysis as well as the identification of pedal remains from podiatry records, which is important for mass disaster scenes. Part III presents actual forensic podiatry case studies from the United Kingdom and the United States, and Part IV focuses on podiatry practice standards, which in many instances parallel expert witness responsibilities. Groundbreaking and essential, this book is useful for medical and criminal justice students as well as podiatrists, criminalists, footwear examiners, forensic anthropologists, attorneys and investigators.

Authored by the pioneers of forensic podiatry