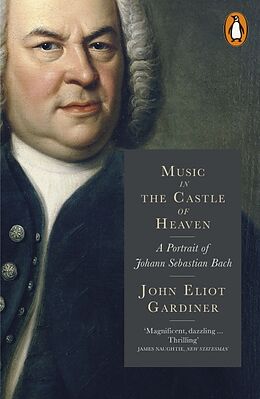 Music in the Castle of Heaven

Johann Sebastian Bach is one of the most unfathomable composers in the history of music. How can such sublime work have been produced by a man who seems so ordinary, so opaque - and occasionally so intemperate? In this remarkable book, John Eliot Gardiner distils the fruits of a lifetime's immersion as one of Bach's greatest living interpreters. Explaining in wonderful detail how Bach worked and how his music achieves its effects, he also takes us as deeply into Bach's works and mind as perhaps words can. The result is a unique book about one of the greatest of all creative artists.

Sir John Eliot Gardiner is one of the world's leading conductors, not only of Baroque music but across the whole repertoire. He founded the Monteverdi Choir and Orchestra, the Orchestre de l'Opéra de Lyon, the English Baroque Soloists, and the Orchestre Revolutionnaire et Romantique. He conducts most of the world's great orchestras and in many of the leading opera houses. He lives and farms in Dorset.

Titel
Music in the Castle of Heaven