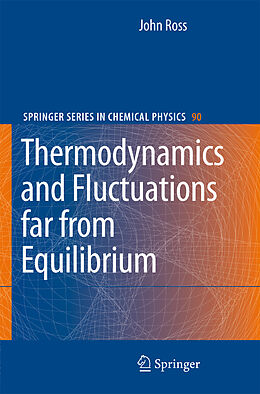 Thermodynamics and Fluctuations far from Equilibrium

Thermodynamics is one of the foundations of science. The subject has been developed for systems at equilibrium for the past 150 years. The story is di?erent for systems not at equilibrium, either time-dependent systems or systems in non-equilibrium stationary states; here much less has been done, even though the need for this subject has much wider applicability. We have been interested in, and studied, systems far from equilibrium for 40 years and present here some aspects of theory and experiments on three topics: Part I deals with formulation of thermodynamics of systems far from equilibrium, including connections to ?uctuations, with applications to n- equilibrium stationary states and approaches to such states, systems with multiple stationary states, reaction di?usion systems, transport properties, andelectrochemicalsystems. Experimentsto substantiatethe formulationare also given. In Part II, dissipation and e?ciency in autonomous and externally forced reactions, including several biochemical systems, are explained. Part III explains stochastic theory and ?uctuations in systems far from equilibrium, ?uctuationdissipation relations, including disordered systems. We concentrate on a coherent presentation of our work and make conn- tions to related or alternative approaches by other investigators. There is no attempt of a literature survey of this ?eld. We hope that this book will help and interest chemists, physicists, b- chemists, and chemical and mechanical engineers. Sooner or later, we expect this book to be introduced into graduate studies and then into undergraduate studies, and hope that the book will serve the purpose.

Covers the science of thermodynamic systems far from equilibrium