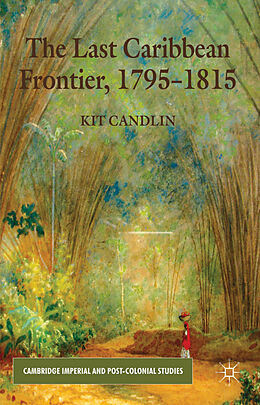 The Southern Caribbean was the last frontier in the Atlantic world and the most contested region in the Caribbean during the Age of Revolution. As well as illuminating this little-understood region, the book seeks to complicate our understanding of the Caribbean, the role of 'free people of colour' and the nature of slavery.

'It is a very long time since I read such an interesting, original - and extremely well-written manuscript from a young scholar. This is a book of great originality, written with terrific verve and historical imagination - and on a topic which has oddly eluded many others working on the Caribbean.'

Autorentext
KIT CANDLIN completed his PhD at the University of Sydney, Australia. In 2009 he was a Research Fellow at the University of Sydney and in 2010 Kit was awarded an Australian Research Council Postdoctoral Fellowship for four years. He has been the recipient of a number of awards and prizes including, The James Kentley Memorial Scholarship for History, The John Frazer Travelling Scholarship and Andrew Mellon Fellowship to the Virginia Historical Society.

Inhalt
Introduction: The Very Limits of Imagination: The Transient World of the Southern Caribbean What Became of the Fedon Rebellion The Queen of Demerara Paper Tigers and Crooked Dispositions The Planter and the Governor Poision, Paranoia and Slavery of the Verge of Empire The Torture of Louisa Calderon That Business of Rosetta Smith The Importunate Revolution on the Main Bibliography