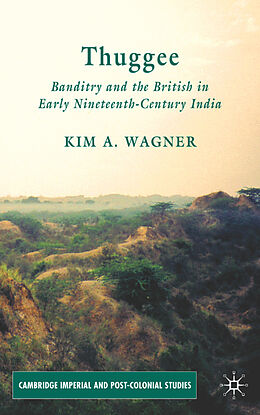 Based largely on new material, this book examines thuggee as a type of banditry, emerging in a specific socio-economic and geographic context. The British usually described the thugs as fanatic assassins and Kali-worshippers, yet Wagner argues that the history of thuggee need no longer be limited to the study of its representation.

Shortlisted for the 2008 History Today-Longman Book of the Year Award. See the History Today website for more information:

'This is a monograph by a young scholar which takes a notoriously difficult problem in 19th century colonial history the rumoured religious cult of Thuggee whereby travellers in a remote region of Uttar Pradesh, were randomly strangled and thrown down wells - and, with persistence and intelligence, dissects it, showing how much Thuggee really existed, and how much was a myth invented by the Englishmen who set out to extirpate it. Wagner convincingly answers this old problem, and succeeds against the odds in making his text readable and not getting bogged down in theory.'

'Thuggee, the supposed ritual murder of travellers on India's roads in the early-nineteenth century, has been a source of contention ever since among colonial officials, nationalists and postcolonial theorists. Kim Wagner has finally cracked the problem, providing the most detailed and convincing analysis yet of its origin and nature.'

'Reading colonial sources against the grain..Thuggee successfully demystifies a much misunderstood phenomenon.'

'This excellent work brings together specific episodes with the general problem of understanding a past world, by writing a micro-history of the circumstances of the murder and disappearance of Lieutenant John Maunsell near Agra, India in 1812...Well-written, this book is also methodologically acute.'

Autorentext
KIM A. WAGNER completed his PhD in History at the University of Cambridge, UK, in 2003. He is currently a Research Fellow at King's College Cambridge, and Associate Researcher at the University of Edinburgh. He works on banditry and the methodological use of trial records, as well as colonial fears of indigenous conspiracies.

Inhalt
Introduction Thuggee reassessed PART I Engaging the Colonial 'Archives of Repression' Thuggee in Pre-colonial India The Discovery of Thuggee, Etawah 1809 Thomas Perry and the First Arrests N.J. Halhed in Sindouse, Oct. 1812 PART II Sindouse The Practice of Thuggee The Itinerant Underworld The World of the Thugs PART III Halhed in Sindouse - A Second Look Sindouse - The Aftermath Continued Measures Against Thugs The Operations Commence The Thuggee Campaign From Sindouse to Sagar Epilogue

Untertitel
Banditry and the British in Early Nineteenth-Century India