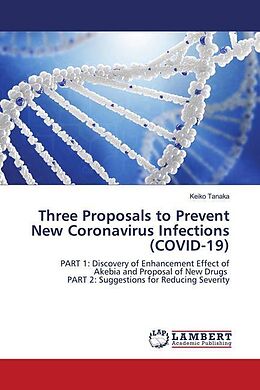 New coronavirus (COVID-19) has brought a really great threat and sadness to the world. It was feared that the initial stage of infection would be the most infectious. There have been many deaths all over the world. I am currently not involved in drug discovery, but I felt that the discoveries about 20 years ago must be useful, and I came up with a proposal. However, I have no xperienced and I could not reach the place of drug discovery to protect the precious lives. So I have written these proposals as my limit of what I can do. This book consists of the first part and the second part. The first part has explained the proposal of mouthwash to prevent infection, the proposal of inhalation drug to suppress infection, the proposal of two drug discovery. With the new corona infection (COVID-19), it is pointed out that there may be a mixture of mild and severe cases. I thought to prevent serious illness, and after repeated research and research, I finally wrote the second part. In order for as many people as possible to live with peace of mind, in the second part, I would explain the proposals to prevent severe disease. I wrote this book in hopes that it would be useful to more people.

Autorentext
Tanaka, Keiko
About 30 years ago, Keiko Tanaka has been interested in the relationship between color and action, and has continued to study with interest from natural science to biological evolution. This is her third book. She made some discoveries in the past to be presented in this research and now holds the qualification of an NR supplement advisor.