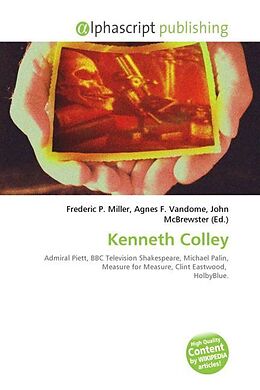 Please note that the content of this book primarily consists of articles available from Wikipedia or other free sources online. Kenneth Colley (born 7 December 1937) is a British actor. A long-time character actor, he came to wider prominence through his role as Admiral Piett in Star Wars Episode V: The Empire Strikes Back and Star Wars Episode VI: Return of the Jedi. Colley was born in Manchester. He played Jesus in The Life of Brian, having also appeared in the earlier Monty Python- related production Ripping Yarns episode "The Testing of Eric Olthwaite" alongside Michael Palin. As a Shakespearean actor he played the Duke of Vienna in the BBC Television Shakespeare production of Measure for Measure in 1979.