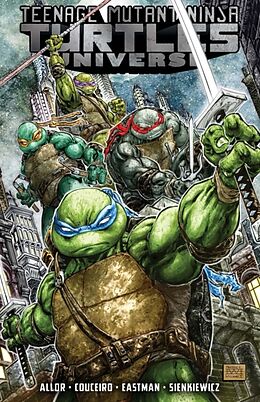 Dive deep into the hidden secrets of the TMNT universe with this anthology series of never-before-seen, standalone stories focusing on all your favorite characters! A mysterious new mutant targets Baxter Stockman, and it's up to a reluctant Leonardo, Michelangelo, Donatello, and Raphael to save him. Little do they know that a larger trap is being laid by a new arch-foe in "The War To Come" by Paul Allor and Damien Couceiro . Plus two back-up stories: first, "Inside Out," where Leonardo faces the oddest mix of foes ever, from TMNT co-creator Kevin Eastman, comics legend Bill Sienkiewicz, and Tom Waltz . Then, 'Urban Legends," featuring everyone's favorite mutant alligator, Leatherhead, from Chris Mowry and Michael Dialynas! Now in its 33rd year, Nickelodeon’s TMNT is a global franchise that has spawned six feature films, four animated TV series, and countless toys, video games, and related items of merchandise. The ongoing TMNT series from IDW is the longest-running Turtles comic series ever, and Teenage Mutant Ninja Turtles Universe is an amazing opportunity for fans to exlore that world.

"I had to double take on some pages because I asked myself "did that just happen?" The art is darker than most pages and there are characters familiar to TMNT over the TV shows and the movies as well as references to other characters not seen yet which fans would enjoy. The scenes are darker and grittier that previously seen books and the action scenes are flawless." - Shane Tydeman, Comic Crusaders

"TMNT Universe is a chip off the old block, but one with its own sense of humor to boot." - Jesse Schedeen, IGN

“The Turtles is a property that has reinvention in its DNA, which keeps it fresh and relevant to every new generation while satisfying the demand from its adult fans.” -- Cyma Zarghami, President, Nickelodeon Group, BusinessWire.com

Tom Waltz is a former active duty U.S. Marine, Desert Storm vet, and former California National Guard Military Policeman. He is an editor for premiere comic book publisher IDW Publishing (www.IDWpublishing.com), as well as the writer of critically-acclaimed graphic novels, including TEENAGE MUTANT NINJA TURTLES, THE LAST FALL, CHILDREN OF THE GRAVE, FINDING PEACE (with Nathan St John), AFTER THE FIRE, SILENT HILL: SINNER'S REWARD, SILENT HILL: PAST LIFE, SILENT HILL DOWNPOUR: ANNE'S STORY and others. He has also written for video games, including as co-writer for SILENT HILL: DOWNPOUR (Konami), and writer for GHOSTBUSTERS: SANCTUM OF SLIME (Atari), TEENAGE MUTANT NINJA TURTLES: BROTHERS UNITE (Paramount), and TEENAGE MUTANT NINJA TURTLES: MUTANTS IN MANHATTAN (Activision). He grew up in Clinton, Michigan and currently makes his home in San Diego, California with his wife and two children.

Kevin Eastman was born in 1962 in Portland, Maine, Kevin began drawing as soon as he was able to hold a crayon. His discovery of comic books gave meaning to his crazed doodling. When Kevin discovered and studied the work of Jack Kirby, Russ Heath, Richard Corben, Vaughn Bode and John Severin, he began to hone his craft. His first published work appeared in 1980, a year or so before he met Peter Laird. In May 1984, he and Laird published Teenage Mutant Ninja Turtles #1, creating the hit heroes in a half-shell. Eastman co-writes Teenage Mutant Ninja Turtles for IDW and can sometimes be found at the San Diego Comic Art Gallery. 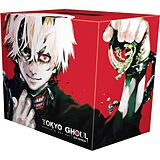 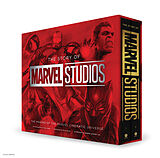