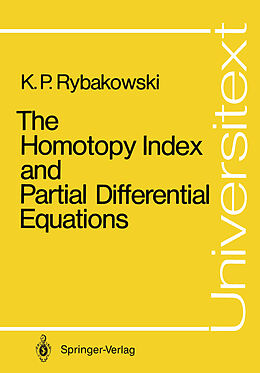 The homotopy index theory was developed by Charles Conley for two sided flows on compact spaces. The homotopy or Conley index, which provides an algebraic-topologi cal measure of an isolated invariant set, is defined to be the ho motopy type of the quotient space N /N , where is a certain 1 2 1 2 compact pair, called an index pair. Roughly speaking, N1 isolates the invariant set and N2 is the "exit ramp" of N . 1 It is shown that the index is independent of the choice of the in dex pair and is invariant under homotopic perturbations of the flow. Moreover, the homotopy index generalizes the Morse index of a nQnde generate critical point p with respect to a gradient flow on a com pact manifold. In fact if the Morse index of p is k, then the homo topy index of the invariant set {p} is Ik - the homotopy type of the pointed k-dimensional unit sphere.

The book presents an extension, due to the present author, of Conley's homotopy index theory to certain (one-sided) semiflows on general (not necessarily locally compact) metric spaces. This permits direct applications to say, parabolic partial differential equations, or functional differential equations. The presentation is self-contained. The subject of the book was previously presented by the author in a series of published papers.