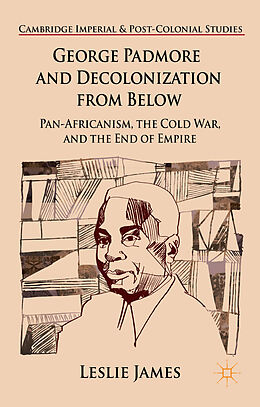 George Padmore and Decolonization from Below

This book argues that the rising tide of anti-colonialism after the 1930s should be considered a turning point not just in harnessing a new mood or feeling of unity, but primarily as one that viewed empire, racism, and economic degradation as part of a system that fundamentally required the application of strategy to their destruction.

James compellingly restores Padmore to the forefront of Black Atlantic scholarship. Indeed, this book speaks to our political moment, with enduring problems of racial and economic inequality demanding renewed attention. The journey of George Padmore reminds us of what were the challenges yet also the moral imperatives of this ongoing struggle. (Christopher J. Lee, American Historical Review, December, 2017)

This story of Pan-Africanist intellectual development is contextualized within wider frameworks of postwar decolonization and the Cold War. The result is a most readable book that raises important new questions about the circulation and reception of transnational political ideas within imperial communication networks. ... an authoritative biography of Padmore by gathering original correspondence and government reports from Britain, Russia, Ghana, the United States, France, and Trinidadan impressive feat ... . (James R. Brennan, Journal of British Studies, Vol. 55 (3), July, 2016)

Does a superb job of situating the political thought and activism of George Padmore within the wider patterns of Cold War politics and the politics of empire. Leslie James is to be praised for a ground-breaking work of intellectual history that critically analyses the political thought of a figure whose previous neglect seems, thankfully, to be coming to an end. her book will, however, be the standard against which all future studies of George Padmore must be measured. (Daniel Whittall, Twentieth Century British History, Vol. 27 (2), June, 2016)

Leslie James's George Padmore and Decolonization from Below: PanAfricanism, the Cold War, and the End of Empire, augments what we know about Padmore with possibly the most sweeping account of his political thinking and his work with Kwame Nkrumah in Ghana. necessarily and productively set the stage for any serious future study of Padmore and the black radical tradition. (Minkah Makalani, Anthurium: A Caribbean Studies Journal, Vol. 13 (1), May, 2016)

Leslie James has done the most thorough analysis of Padmore's political thought and strategies as expressed in his writings and in the letters which survive. this is a lucid, well-organised and well researched study of an important figure in anti-colonial politics from the beginning of the 1930s to 1959; the sophisticated analysis of a large body of writing and its changing contexts make this an important contribution to our understanding of the times as well as the man. (Peter D. Fraser, Commonwealth & Comparative Politics, Vol. 53 (4), 2015)

Autorentext
Leslie James is Leverhulme Early Career Fellow in the Department of African Studies and
Anthropology, University of Birmingham. Prior to this, she was Lecturer in World History at the
University of Cambridge. Other publications include the forthcoming volume, Decolonization
and the Cold War: Negotiating Independence, co-edited with Elisabeth Leake.

Inhalt
Introduction: The Artful Anti-Colonialist 1. Origins: 'The Most Completely Political Negro' 2. Putting Empire in Black and White: Padmore's Ideas about Race and Empire 3. 'The Long, Long Night is Over': A War of Opportunity? 4. Writing Anti-Imperial Solidarity from London: George Padmore's Colonial Journalism, 1940-1951 5. The Psychological Moment: The Colonial Office, Pan-Africanism, and the Problem of the Soviet Union, 1946-1950 6. A Buttress for the 'Beacon Light' 7. The Era of Padmore the 'Outsider': Nation, Diaspora, and Modernity, 1950-1956 8. Ghana, Death, and the Afterlife Conclusion: 'The Soliloquy of Africa'

Titel
George Padmore and Decolonization from Below

Untertitel
Pan-Africanism, the Cold War, and the End of Empire