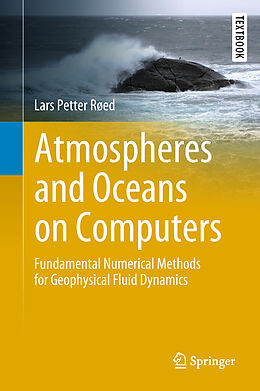 Atmospheres and Oceans on Computers

This textbook introduces step by step the basic numerical methods to solve the equations governing the motion of the atmosphere and ocean, and describes how to develop a set of corresponding instructions for the computer as part of a code. Today's computers are powerful enough to allow 7-day forecasts within hours, and modern teaching of the subject requires a combination of theoretical and computational approaches.

The presentation is aimed at beginning graduate students intending to become forecasters or researchers, that is, users of existing models or model developers. However, model developers must be well versed in the underlying physics as well as in numerical methods. Thus, while some of the topics discussed in the modeling of the atmosphere and ocean are more advanced, the book ensures that the gap between those scientists who analyze results from model simulations and observations and those who work with the inner works of the model does not widen further.

In this spirit, the course presents methods whereby important balance equations in oceanography and meteorology, namely the advection-diffusion equation and the shallow water equations on a rotating Earth, can be solved by numerical means with little prior knowledge. The numerical focus is on the finite-difference (FD) methods, and although more powerful methods exist, the simplicity of FD makes it ideal as a pedagogical introduction to the subject. The book also includes suitable exercises and computer problems.


Course-based, self-contained and concise primer on the subject matter

Lars Petter Røed is a Professor Emeritus at the Department of Geosciences of the University of Oslo. Since 1994 he is also a Senior Scientist at the Norwegian Meteorological Institute. His research interests include physical oceanography and numerical modeling, climate change, numerical ocean weather prediction, mesoscale ocean circulation and the role of eddies in the heat transport of the world oceans. He has been teaching scientific computing in his field of expertise for many years.

Titel
Atmospheres and Oceans on Computers