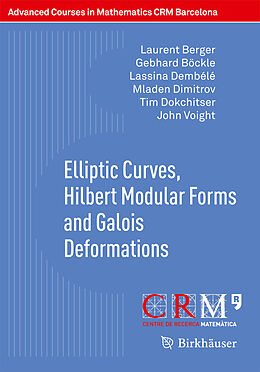 This book details recent developments and major changes in Galois deformation theory during the last decade, including deformations of pseudo-representations, framed deformations, and groupoids.

The notes in this volume correspond to advanced courses held at the Centre de Recerca Matemàtica as part of the research program in Arithmetic Geometry in the 2009-2010 academic year. The notes by Laurent Berger provide an introduction to p -adic Galois representations and Fontaine rings, which are especially useful for describing many local deformation rings at p that arise naturally in Galois deformation theory. The notes by Gebhard Böckle offer a comprehensive course on Galois deformation theory, starting from the foundational results of Mazur and discussing in detail the theory of pseudo-representations and their deformations, local deformations at places l p and local deformations at p which are flat. In the last section,the results of Böckle and Kisin on presentations of global deformation rings over local ones are discussed. The notes by Mladen Dimitrov present the basics of the arithmetic theory of Hilbert modular forms and varieties, with an emphasis on the study of the images of the attached Galois representations, on modularity lifting theorems over totally real number fields, and on the cohomology of Hilbert modular varieties with integral coefficients. The notes by Lassina Dembélé and John Voight describe methods for performing explicit computations in spaces of Hilbert modular forms. These methods depend on the Jacquet-Langlands correspondence and on computations in spaces of quaternionic modular forms, both for the case of definite and indefinite quaternion algebras. Several examples are given, and applications to modularity of Galois representations are discussed. The notes by Tim Dokchitser describe the proof, obtained by the author in a joint project with Vladimir Dokchitser, of the parity conjecture for elliptic curves over number fields under the assumption of finiteness of the Tate-Shafarevich group. The statement of the Birch and Swinnerton-Dyer conjecture is included, as well as a detailed study of local and global root numbers of elliptic curves and their classification.