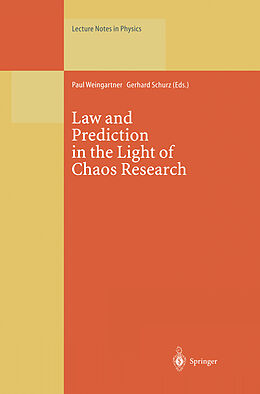 Law and Prediction in the Light of Chaos Research

Like relativity and quantum theory chaos research is another prominent concept of 20th century physics that has triggered deep and far-reaching discussions in the philosophy of science. In this volume outstanding scientists discuss the fundamental problems of the concepts of law and of prediction. They present their views in their contributions to this volume, but they also are exposed to criticism in transcriptions of recordings made during discussions and in comments on their views also published in this book. Although all authors assume familiarity with some background in physics they also address the philosophers of science and even a general audience interested in modern science's contribution to a deeper understanding of reality.

Autorentext
Paul Weingartner, Ph.D. 1961 (Philosophy/Physics) Univ. of Innsbruck, Prof. of Philosophy 1971- (em.1999) Univ. of Salzburg and Institut fuer Wissenschaftstheorie. Honory Doctorate 1995 Marie Curie Univ. Lublin, Member of the New York Academy of Sciences. 10 books, 36 books edited, 150 articles. Guest professorships and guest lectures at more than 100 universities. Paul Weingartner is one of the most distinguished philosophers and logicians in German language countries. He has published many books and articles in the domains of philosophy of sciences, logic, ethics and philosophy of religion.

Titel
Law and Prediction in the Light of Chaos Research