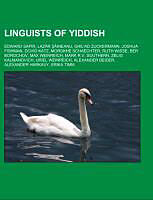 Source: Wikipedia. Pages: 24. Chapters: Edward Sapir, Lazar Saineanu, Ghil'ad Zuckermann, Joshua Fishman, Dovid Katz, Mordkhe Schaechter, Ruth Wisse, Ber Borochov, Max Weinreich, Mark R.V. Southern, Zelig Kalmanovich, Uriel Weinreich, Alexander Beider, Alexander Harkavy, Erika Timm, Solomon Birnbaum, Michael Wex, Marvin Herzog, Leonard Talmy, Nochum Shtif. Excerpt: Lazar Saineanu (Romanian pronunciation: , also spelled Seineanu, born Eliezer Schein; Francisized Lazare Sainéan, French pronunciation: , or Sainéanu; April 23, 1859 - May 11, 1934) was a Romanian-born philologist, linguist, folklorist and cultural historian. A specialist in Oriental and Romance studies, as well as a Hebraist and a Germanist, he was primarily known for his contribution to Yiddish and Romanian philology, his work in evolutionary linguistics, and his activity as a literary and philological comparatist. Saineanu also had innovative contributions to the investigation and anthologizing of Romanian folklore, placed in relation to Balkan and East Central European traditions, as well as to the historical evolution of Romanian in a larger Balkan context, and was a celebrated early contributor to Romanian lexicography. His main initiatives in these fields are a large corpus of collected fairy tales and the 1896 Dictionarul universal al limbii române ("The Universal Dictionary of the Romanian Language"), which have endured among the most popular Romanian scientific works. A member of the non-emancipated Jewish-Romanian community, Lazar Saineanu stood for the Haskalah ideas, and opted in favor of Jewish assimilation into the Romanian mainstream. His repeated requests for naturalization were eventually unsuccessful, but propelled him to the center of a political conflict which opposed the antisemitic current to the advocates of tolerance. In 1901, Saineanu and his family quit the Kingdom of Romania and resettled in France, where the scholar lived until his death. Becoming known for his pioneering work to the study of Middle French and his investigations into the origins of argot, as well as for his critical essays on 16th century writer François Rabelais, he was a recipient of the Institut de France's Volney Prize for 1908. The son in law of publisher Ralian Samitca, Saineanu was survived by his brother Constantin, a noted lexicographer, journalist and polemicis