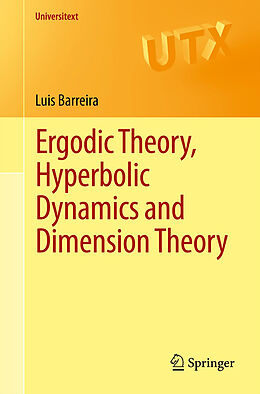 The volume is primarily intended for graduate students interested in dynamical systems, as well as researchers in other areas who wish to learn about ergodic theory, thermodynamic formalism, or dimension theory of hyperbolic dynamics at an intermediate level in a sufficiently detailed manner. In particular, it can be used as a basis for graduate courses on any of these three subjects. The text can also be used for self-study: it is self-contained, and with the exception of some well-known basic facts from other areas, all statements include detailed proofs.

Autorentext
Luís Barreira is a Professor of Mathematics at Instituto Superior Técnico, in Lisbon. He is the author of 15 books, including 5 research monographs published by AMS, Birkhäuser, Cambridge and Springer, and several textbooks in various languages. He is also the author of more than 130 articles in mathematics, mainly in differential equations and dynamical systems.