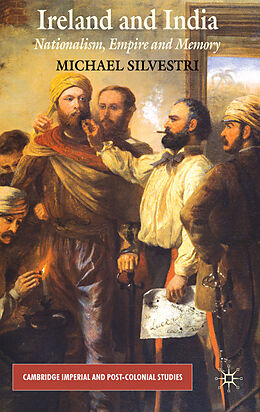 Through a consideration of historical memory, commemoration and the 'imagined communities' of nationalism, Ireland and India examines three aspects of Ireland's imperial history: relationships between Irish and Indian nationalists, the construction of Irishmen as imperial heroes, and the commemoration of an Irish regiment's mutiny in India.

Examines the imaginative dimension of Irish-Indian imperial connections in the late nineteenth and twentieth centuries by considerating the relationships between Irish and Indian nationalists, the construction of Irishmen as British imperial heroes, and Irish nationalist commemoration of the mutiny of a regiment of Irish soldiers in India.

Inhalt
Table of Contents Introduction 'An Assertion of Liberty Incarnate': Irish and Indian Nationalists in North America 'The Sinn Féin of India': The Reception of Irish Revolutionary Nationalism in Bengal 'Lord and Master Nikkal Seyn': The Construction of John Nicholson as a British Imperial Hero An 'Irish Paladin': John Nicholson as an Ulster and Irish Imperial Hero 'The Remains of Ireland's Loneliest Martyr': The Commemoration of the Connaught Rangers Mutiny 'Enemies of the Empire'? The Imperial Context of the Connaught Rangers Mutiny Conclusion Bibliography