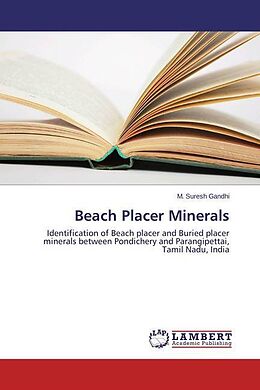 The present study area extends between Pondicherry and Parangipettai. Heavy mineral by weight percentage of the all the three fractions namely, coarse, medium and fine are grouped. In the study area the heavies are dominant in Parangipettai (21.83 %), and followed by Narambai (10.89 %), Veerampattinam (9.48 %), Cuddalore (6.91 %), Nanjalingapettai (6.18 %), Samiyarpettai (8.14 %).The present study highlights that the placers is found to be more in the surface as well as core sample in the northern Coastal of Tamil Nadu . This could be due to the winnowing action of waves and currents and density sorting of heavy minerals. The study also concluded the sediment in the surface and core samples also exhibits more or less a similar type of concentration.

Dr. M. Suresh Gandhi, M.Sc., M.Phil., Ph.D., is presently working as Associate Professor in the Department of Geology, University of Madras, Chennai, India since August,2004. He has completed his Ph.D. with distinction in Geology at Tamil University, Thanjavur. He has 16 years of research experience in the field of Micropaleontology, Beach placers.