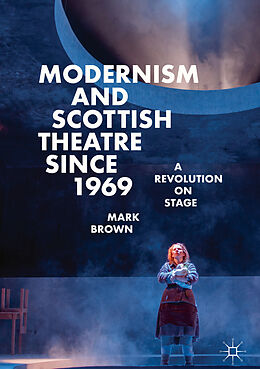 Modernism and Scottish Theatre since 1969

This book argues that Scottish theatre has, since the late 1960s, undergone an artistic renaissance, driven by European Modernist aesthetics. Combining detailed research and analysis with exclusive interviews with ten leading figures in modern Scottish drama, the book sets out the case for the last half-century as the strongest period in the history of the Scottish stage. Mark Brown traces the development of Scottish theatre's Modernist revolution from the arrival of influential theatre director Giles Havergal at the Citizens Theatre, Glasgow in 1969 through to the advent of the National Theatre of Scotland in 2006. Finally, the book contemplates the future of Scotland's theatrical renaissance. It is essential reading for anyone interested in contemporary theatre and/or the modern history of live drama in Scotland.

Contributes the perspective of a long-established theatre critic and academic

Autorentext
Mark Brown is theatre critic of the Scottish national newspaper the Sunday Herald and Scottish critic of the UK national title the Daily Telegraph. He teaches regularly at the Royal Conservatoire of Scotland and is a guest lecturer at the University of St Andrews and other universities. He holds a doctorate in Theatre Studies from the University of Dundee.

Inhalt
1. Preface: Defining our terms.- 2. Introduction.- 3. 'My wife glimpsed a testicle!': the Citizens Theatre since 1969.- 4. Communicado and 'popular experimentalism'.- 5. Interviews with five theatremakers.- 6. The National Theatre of Scotland: mapping onto the landscape.- 7. Conclusion: the future of a renaissance.

Titel
Modernism and Scottish Theatre since 1969

Untertitel
A Revolution on Stage