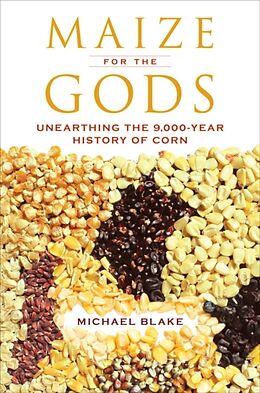 Maize for the Gods

"[Blake's] real triumph lies in his candid explanation and interrogation of modern research methods of maize: everything from archaeological dating and genetic investigation to microscopic analysis and ancient dietary reconstruction. In the end, what emerges is a complex narrative of reciprocal dependence. As Blake succinctly puts it, ‘humans grow maize and maize grows humans’."

Autorentext
Michael Blake is Professor and Head of the Anthropology Department at the University of British Columbia. He studies the archaeology of Mesoamerica and the Northwest Coast of Canada and is the author of Colonization, Warfare, and Exchange at the Postclassic Maya Site of Canajasté, Chiapas, Mexico (2010) and the editor of Pacific Latin America in Prehistory (1999).

Klappentext
"This volume is an amazing summary of our current knowledge of the Americas' greatest contribution to world cuisine. Moving from maize's origin and spread through its transformation as an evolutionary and cultural partner with humanity, Michael Blake masterfully tackles a dizzying array of research from many disciplines to produce the definitive book about maize." --Paul E. Minnis, Professor of Anthropology, University of Oklahoma, and author of New Lives for Ancient and Extinct Crops

"As one of the foremost experts in the field, Michael Blake provides an insightful, well-written account of the archaeology, origins, and domestication of corn. He shares how recent techniques in ethnobotany, molecular biology, and direct dating have transformed our perceptions of its economic importance and biogeography, and his discussion of its pre-Columbian symbolic significance reveals why corn is so important today."
--John Staller, Botanical Research Institute of Texas, and coeditor of Histories of Maize

"Michael Blake is to be congratulated in showing how what must be one of the most farfetched human experiments in plant domesticationthat of maizewas propelled by the mind-altering fermented beverage chicha, made first from the sugary juice of the cornstalk and later from the carbohydrate-rich kernels." --Patrick McGovern, author of Uncorking the Past: The Quest for Wine, Beer, and Other Alcoholic Beverages

Zusammenfassung
Tracing maize from its first appearance and domestication in ancient campsites and settlements in Mexico to its intercontinental journey through most of North and South America, this book tells the story of the artistic creativity, technological prowess, and social, political, and economic resilience of America's first peoples.

Titel
Maize for the Gods