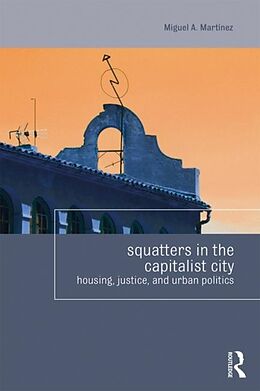 Squatters in the Capitalist City

"Miguel Martinez's analysis of squatters' movements is an insightful probing of the failures of housing provision under neoliberalism and the varying ways that mobilization in response has occurred within different contexts. It also offers an important contribution to the theorization of urban social movements within a political-economic framework." Susan S. Fainstein, Senior Research Fellow, Harvard University Graduate School of Design, USA,Author ofThe Just City "Squatting empty buildings has been for decades a self-organized policy to ensure the right to adequate housing for those excluded both from the residential markets and the bureaucratic and exclusionary webs of housing policies. This book is an essentialroad map to understand squatting in Europe, in its diversity and complexity." Raquel Rolnik is Professor of Planning at the University of São Paulo, Brazil, Author of Urban Warfare: Housing Under the Threat of Finance "Squatting is a realityin almost every country in the world. Miguel A. Martínez shows it's about more than a roof over their heads. Squatting is the best housing policybecause they almost everywhere point out and enforce alternatives to organize housing beyond the capitalist exploitation logic." Andrej Holm, Department of Urban and Regional Sociology of Humboldt Universität zu Berlin, Germany, Co-editor of The Berlin Reader: A Compendium on Urban Change and Activism "The most comprehensive analysis of European urban squatters' movements ever written. By examining a remarkable range of cases across Europe, the author reveals the surprising diversity within and between these movements, and the political opportunities and constraints that shaped squatters' interactions with their numerous opponents. A beautifully written example of scholar-activism by one of its most important voices." Tom Slater, University of Edinburgh,Scotland, Co-editor of The Sociology of Stigma

Autorentext
Miguel A. Martínezis Professor of Sociology at the IBF (Institute for Housing and Urban Research), Uppsala University, Sweden. He was previously affiliated with the City University of Hong Kong and the Complutense University of Madrid. Since 2009 he has been a member of the activist-research network SqEK (Squatting Everywhere Kollective). He has conducted different studies about urban sociology, social movements, and participatory-activist methodologies. Most of his publications are available at www.miguelangelmartinez.net.

Zusammenfassung
To date, there has been no comprehensive analysis of the disperse research on the squatters' movement in Europe. In Squatters in the Capitalist City, Miguel A. Martínez López presents a critical review of the current research on squatting and of the historical development of the movements in European cities according to their major social, political and spatial dimensions. Comparing cities, contexts, and the achievements of the squatters' movements, this book presents the view that squatting is not simply a set of isolated, illegal and marginal practices, but is a long-lasting urban and transnational movement with significant and broad implications. While intersecting with different housing struggles, squatters face various aspects of urban politics and enhance the content of the movements claiming for a 'right to the city.' Squatters in the Capitalist City seeks to understand both the socio-spatial and political conditions favourable to the emergence and development of squatting, and the nature of the interactions between squatters, authorities and property owners by discussing the trajectory, features and limitations of squatting as a potential radicalisation of urban democracy.

Titel
Squatters in the Capitalist City