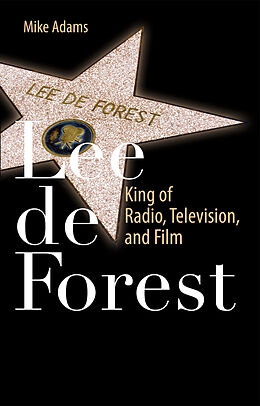 The life-long inventor, Lee de Forest invented the three-element vacuum tube used between 1906 and 1916 as a detector, amplifier, and oscillator of radio waves. Beginning in 1918 he began to develop a light valve, a device for writing and reading sound using light patterns. While he received many patents for his process, he was initially ignored by the film industry. In order to promote and demonstrate his process he made several hundred sound short films, he rented space for their showing; he sold the tickets and did the publicity to gain audiences for his invention. Lee de Forest officially brought sound to film in 1919. Lee De Forest: King of Radio, Television, and Film is about both invention and early film making; de Forest as the scientist and producer, director, and writer of the content. This book tells the story of de Forest's contribution in changing the history of film through the incorporation of sound. The text includes primary source historical material, U.S. patents and richly-illustrated photos of Lee de Forest's experiments. Readers will greatly benefit from an understanding of the transition from silent to audio motion pictures, the impact this had on the scientific community and the popular culture, as well as the economics of the entertainment industry.

'Lee de Forest: King of Radio, Television and Film' Author Mike Adams, a media professor at San Jose State University, knows radio and film: he brings those worlds together in his discussion of de Forest, including the inventor's role in the film industry. This is a well-documented history book that media and technology history fans will appreciate. (Radio World, September, 2012)

Lee de Forest: King of Radio, Television, and Film is the first full biography of the once-famous inventor to appear in years. Adams, a longtime San Jose State University faculty member and historian, has plumbed the de Forest archive for this study which brings to light many new details of a complex and sometimes maddening man. An appendix provides details of many key patents. This is an important book for the too-thin shelf on radio's pioneers. (Chris Sterling, CBQ Communication Booknotes Quarterly, Vol. 43 (2), April-June, 2012)

We have a new and insightful biography of Lee de Forest, by long-term radio-history author Mike Adams. the reader gets 'basic training' in motion-picture history and production theory, a helpful addition. Adams treats the personality of de Forest with realism . he had his admirers, especially himself, and did perform useful (!) work. This book is a real contribution to de Forest lore, well organized and satisfyingly written. (Ludwell Sibley, Tube Collector, February, 2012)

This book is well written, flows well and is easy to read. I enjoyed the book very much. There are many very interesting images from the de Forest papers that I had not seen before . The book and the images therein provide an opportunity for further research and insights into the real history of de Forest. I certainly recommend this thought-provoking book to anyone interested in de Forest's contributions to the evolution of radio . (Eric Wenaas, Antique Wireless Journal, Vol. 53 (1), January, 2012)

At long last we have a biography of Lee de Forest, the self-proclaimed 'father of radio.' Mike Adams brings to life the story of a great inventor. the reader will discover that Lee de Forest's contributions went well beyond radio's sound technology. The book is organized into ten chapters walking the reader through life, controversies, inventions, and contributions. a very significant contribution to the history of electronic media and motion pictures and to the scholarship and classrooms of both disciplines. (Donald G. Godfrey, Journal of Broadcasting & Electronic Media, Vol. 56 (2), 2012)

Autorentext
Mike Adams has been a radio personality and a film maker. Currently he is a professor of radio, television, and film at San Jose State University, where he has been a department chair and an associate dean. As a researcher and writer of broadcast and early technology history, he created two award-winning documentaries for PBS, Radio Collector, and Broadcasting's Forgotten Father. He has had published numerous articles and three books, the most recent of which is Charles Herrold, Inventor of Radio Broadcasting. More information about the author and his work can be found at www.mikeadams.org and www.leedeforest.org

Lee de Forest, Yale doctorate and Oscar winner, gave voice to the radio and the motion picture. Yet by the 1930s, after the radio and the Talkies were regular features of American life, Lee de Forest had seemingly lost everything. Why? Why didn't he receive the recognition and acclaim he sought his entire life until years later in 1959, when he was awarded an Oscar?

A lifelong innovator, Lee de Forest invented the three-element vacuum tube which he developed between 1906 and 1916 as a detector, amplifier, and oscillator of radio waves. As early as 1907, he was broadcasting music programming. In 1918, he began to develop a system for recording and playing back sound by using light patterns on motion picture film. In order to promote and demonstrate his process he made hundreds of short sound films, found theatres for their showing, and issued publicity to gain audiences for his invention. While he received many patents for this technology, he was ignored by the film industry.

Lee de Forest, King of Radio, Television, and Film is about the process of inventionhow inventors really get ideas and how every inventor learns that they must know the work of those who came before, and why the myth of the lone inventor and the Aha! moment is largely a fiction.

Through his inventions, Lee de Forest made possible the mass entertainment media we enjoy today. This is his story.