Meet the boys behind the new British Invasion! This exciting new biography tells the incredible story of pop group One Direction. From their start on the UK TV show X Factor to sold-out concerts, MTV Video Music Awards, and chart-topping hits, Harry, Niall, Liam, Louis, and Zayn show no signs of slowing down. The groups first album Up All Night made history as the first debut album by a British group to enter at number one on the US Billboard 200 chart. Full-color photos and fascinating facts make this book a must for any Directioner. 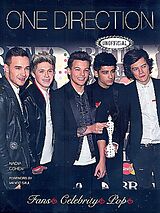