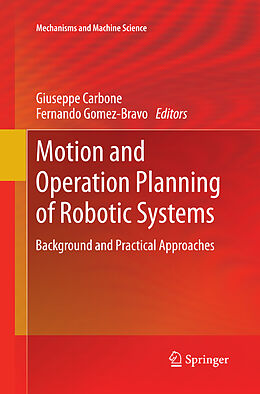 This book addresses the broad multi-disciplinary topic of robotics, and presents the basic techniques for motion and operation planning in robotics systems. Gathering contributions from experts in diverse and wide ranging fields, it offers an overview of the most recent and cutting-edge practical applications of these methodologies. It covers both theoretical and practical approaches, and elucidates the transition from theory to implementation. An extensive analysis is provided, including humanoids, manipulators, aerial robots and ground mobile robots.

*The theoretical background of robotics.

*Application of motion planning techniques to manipulators, such as serial and parallel manipulators.

Provides an introduction to different techniques of planning for robotics systems

Illustrates the application of motion planning techniques to manipulators

Examines theoretical and as well as practical approaches

Giuseppe Carbone graduated with an M.S. degree in mechanical engineering in 2000 and a Ph.D. degree in 2004 both from the University of Cassino, Italy. Since 1999, he has been a Member of Laboratory of Robotics and Mechatronics (LARM). Since March 2005, Carbone has been an Assistant Professor at the Department of Civil and Mechanical Engineering, University of Cassino and South Latium, Italy. On May 2010, he has received the National Habilitation as an Associate Professor from the Spanish Ministry of Education (ANECA). From 1999 to 2013 he has been a visiting Technical University of Braunschweig, Germany, for six months, Humanoid Robotics Institute, Waseda University, Tokyo, Japan, for about one year, Beihang University, Beijing, China for about one month, and University Carlos III, Madrid, Spain for teaching activities from 2008 to 2012. His research interests cover aspects of mechanics of manipulation and grasp, mechanics of robots and mechanics of machinery. He is author and/or co-author of about 200 papers that have been published in Proceedings of National and International Conferences or in International Journals.

Fernando Gomez-Bravo was born in Cordoba (Spain) in 1965. He received a degree in Industrial Physics in the National University UNED, (Madrid, Spain) in 1991 and a Ph.D. degree from the University of Sevilla, (Spain), in 2001. From 1991 to 2001, he was with the National Railway Company (RENFE) as a responsible of projects development in the area of automatic systems for railway control. Since 2001 he is in the Electronic and Automation Department, of the Huelva University (Spain), where he has been Vice-Director of the Engineering School. He has stayed, as a visiting scientist, in the Institute for System and Robotics (Lisbon, Portugal), in the Mechanics Institute of the Graz University (Österreich) and in the Laboratory of Mechatronics and Robotics of the Cassino University (Italy). In the last years he is leading several research and development projects with different companies, mainly in robotics, control, and autonomous systems in general. He is the author or coauthor of more than 100 publications, including book chapters and papers published in journals and conference proceedings, dealing with different topics like path planning, control of autonomous vehicles, manipulators and education in robotics.