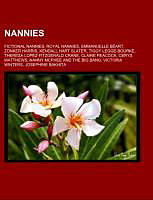 Source: Wikipedia. Pages: 49. Chapters: Fictional nannies, Royal nannies, Emmanuelle Béart, Zonker Harris, Kendall Hart Slater, Tiggy Legge-Bourke, Theresa Lopez-Fitzgerald Crane, Claire Peacock, Cerys Matthews, Nanny McPhee and the Big Bang, Victoria Winters, Josephine Bakhita, Louise Woodward case, Ned Parker, Fran Fine, Sandra Samuel, Vivian Maier, Agatha Harkness, Lori Lee, Serendipity Gottlieb, Mary Poppins, Jill Murphy, Kendra Kassebaum, Marion Crawford, Laura Beale, Margaretta Eagar, Mrs. Pack, Bronwyn Davies, Sally Rogers, Charlotte Bill, Gabrielle Renard, Nanny cam, Nurse Matilda, The Queen of Elfan's Nourice. Excerpt: Kendall Hart Slater is a fictional character from the American daytime drama All My Children. The character was portrayed by Sarah Michelle Gellar from 1993 to 1995, and portrayed by Alicia Minshew, from 2002 to present. Kendall is the biological daughter of Erica Kane and is a product of a traumatizing rape by movie actor Richard Fields on the night of Erica's 14th birthday. The character was originally cast as a complex villain, detailed as "the most terrible daughter on daytime", but has since reformed. Kendall represents a modern archetype in soap opera, of mysterious outsiders with secret blood ties to core characters. To drive the plot forward, they often ingratiate themselves to their birth parent's family, only to cause destructive havoc later on, as revenge for their perceived abandonment. Her predecessor in this can be seen first in Donna Ludlow of EastEnders, and after Kendall, Carly Corinthos of General Hospital. Now one of the show's most beloved heroines, with devious but relevant aspects still intact, she is a passionate wife and mother. She has been married to Zachary "Zach" Slater, and is a parent to two sons, Spike Lavery and Ian Slater. In the past, she has had a strenuous best friend/worst enemy relationship with character Greenlee Smythe. Due to Kendall's complicated history, her skill for exacting revenge, need for love when vulnerable, and often acting on the notion that the ends justify the means, she has emerged as one of soap opera's most layered and popular characters. Kendall has been the subject of Soap Opera Rapid Aging Syndrome (SORAS), which caused the show's producers to "de-SORAS" her biological mother Erica Kane, portrayed by Susan Lucci. Lucci says that Erica was 15 when the show began in 1970. "I love playing her. I enjoyed playing her when she was a 15-year-old high school girl, the naughty girl in town, and I enjoy playing her now, when she's still the naughty girl, but she's broadened her area of operation to include the entir