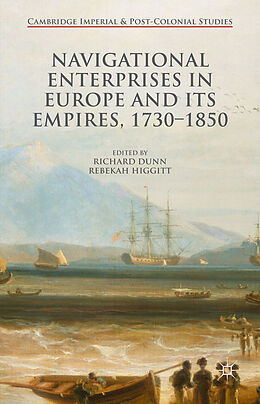 Navigational Enterprises in Europe and its Empires, 1730-1850

This book explores the development of navigation in the eighteenth and nineteenth centuries. It examines the role of men of science, seamen and practitioners across Europe, and the realities of navigational practice, showing that old and new methods were complementary not exclusive, their use dependent on many competing factors.

The well-written introduction by Rebekah Higgitt and Richard Dunn provides a good overview, and even readers who are not specialists will profit from studying the contents of this important contribution. It opens up many highly interesting research perspectives and can be recommended wholeheartedly. (Günther Oestmann, ISIS, Vol. 108 (4), December, 2017)

The editors declare an aim of giving depth to the British story by describing analogous activity in other European countries and the transnational linkages that facilitated progress in the theory and practice of navigation. This volume must find a place in university libraries. It is essential reading for any serious student of the development of marine navigation. (M. K. Barritt, The Mariner's Mirror, Vol. 102 (2), April, 2016)

This collection of essays deals with the development and introduction of methods for finding longitude at sea between 1730 and 1850, mainly by non-British nations. Approaching the issue from a non-British perspective considerably broad-ensour understanding and is no doubt the book's strongest point. this volume deserves a place in the bookcase of everyone interested in or studying the history of navigation and astronomy. (W. F. J. Mörzer Bruyns, The Northern Mariner, Vol. 26 (1), March, 2016)

It has achieved a set of original perspectives on the Board and its work, that were not accessible from the internal study, as well as a rich series of accounts that are valuable in their own right. Taken together, these papers form an excellent book, which demonstrates that the study of navigation in the period, and perhaps particularly of the longitude problem, has resumed its serious engagement with historical work. (Jim Bennett, The International Journal of Maritime History, Vol. 28 (4), 2016)

Titel
Navigational Enterprises in Europe and its Empires, 1730-1850