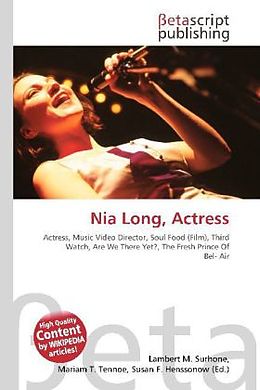 Please note that the content of this book primarily consists of articles available from Wikipedia or other free sources online. Nitara "Nia" Long (born October 30, 1970) is an American actress and occasional music video director. She is best known for her roles in the television series The Fresh Prince Of Bel-Air and Third Watch, and the films Soul Food, Love Jones, The Best Man, Big Momma''s House, and Are We There Yet?. Long was born in Brooklyn, New York, U.S. to Talita, a teacher and printmaker, and Doughtry "Doc" Long, a high school teacher and poet. Her family is of Afro-Trinidadian descent. Her stage name, Nia, is one of the seven days of Kwanzaa, which means "PURPOSE" in Swahili. Long''s parents divorced when she was two years old, and she and her mother moved to Iowa City, Iowa, where her mother studied fine arts. They subsequently moved to a South Los Angeles neighborhood when Long was seven. Long''s father currently resides in New Jersey in the City of Trenton, while her half-sister is comedienne Sommore, star of The Queens of Comedy.