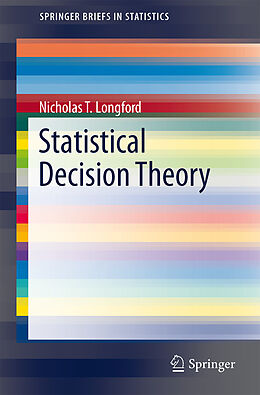 This monograph presents a radical rethinking of how elementary inferences should be made in statistics, implementing a comprehensive alternative to hypothesis testing in which the control of the probabilities of the errors is replaced by selecting the course of action (one of the available options) associated with the smallest expected loss.

Its strength is that the inferences are responsive to the elicited or declared consequences of the erroneous decisions, and so they can be closely tailored to the client's perspective, priorities, value judgments and other prior information, together with the uncertainty about them.

Exercises and suggestions for further reading are provided

Suitable as textbook for graduate courses in Statistics

Autorentext
Nick Longford received his doctorate in Statistics from Leeds University, England, in 1982. Since 2004 he has served as the Director of SNTL Statistics Research and Consulting in Barcelona, Spain. He has been a visitor at several academic institutions, most recently CEPS/INSTEAD in Esch, Luxembourg (2011, 2012 and 2013), Universidad de Valle, Colombia (2011 and 2013), la Sapienza, Rome, Italy (2009 and 2010) and Universitat Pompeu Fabra, Barcelona, Spain (intermittently since 2005). His previous monographs with Springer have dealt with methods for large-scale educational assessment (1995), missing data and small-area estimation (2005), and statistics curriculum for the social sciences (2008). His journal articles have been published in the Journals of the Royal Statistical Society, Statistics in Medicine, Computational Statistics and Data Analysis, Statistica Neerlandica, Survey Methodology, Journal of Educational and Behavioral Statistics, Journal of Applied Statistics and others.