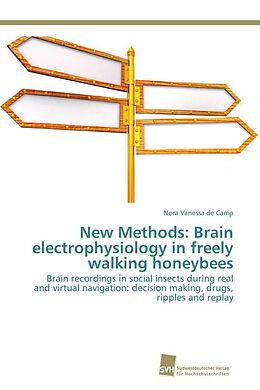 Insects are presently the most successfull taxon with respect to the number of individuals and species. They are economically as well as ecologically important, as for example honeybees. Insects developed a huge variety of locomotor strategies, the most important ones are walking and flight. Due to their small size, electrophysiology has mostly been done in restrained insects. The development of chronically implantable micro plugs for long-term extracellular brain recordings in eusocial insects, like honeybees and hornets led to astonishing results: place related spiking activity during real and virtual navigation as well as associated local field potentials and probably replay of these patterns during sleep phases. Are map like spatial coding strategies, as they are documented for the rodent hippocampus, also realized in comparatively small insect brains, with approximately 1.000.000 Neurons?

Dr. Nora de Camp was born in 1981 and studied Biology at Freie Universität Berlin. Currently, she is postdoc in the department behavioural physiology at Humboldt-Universität zu Berlin in her native city and stipend holder of the international foundation for neurobionics.