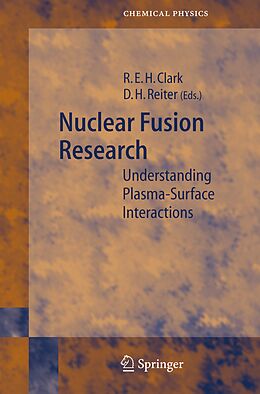 It became clear in the early days of fusion research that the effects of the containment vessel (erosion of "impurities") degrade the overall fusion plasma performance. Progress in controlled nuclear fusion research over the last decade has led to magnetically confined plasmas that, in turn, are sufficiently powerful to damage the vessel structures over its lifetime. This book reviews current understanding and concepts to deal with this remaining critical design issue for fusion reactors. It reviews both progress and open questions, largely in terms of available and sought-after plasma-surface interaction data and atomic/molecular data related to these "plasma edge" issues.

R. E. H. Clark is the Head of the Atomic and Molecular Data Unit of the International Atomic Energy Agency. He has an extensive background in the calculation of cross sections for electron impact excitation of atomic ions. He and co-workers at the Los Alamos National Laboratory have developed computational tools for the calculation of atomic structure and cross sections for excitation and ionization of atomic ions. These calculated data have been used in extensive modelling calculations of plasmas for a number of applications, including fusion energy research.

D. Reiter is a professor at the Institute for Laser and Plasmaphysics at Heinrich Heine University Düsseldorf, and at the Forschungszentrum Jülich, Germany. He and co-workers are the authors of the EIRENE Monte Carlo Code for atomic, molecular and surface processes in fusion plasmas, which is currently used in most fusion laboratories, including the international design team for the next step device ITER. His group also initiated and completed the first versions of the B2-EIRENE suit of codes, which, again, has become a standard tool for fusion edge plasma studies allowing to assess a consistent micro-macro model of plasma flow and atomic/molecular kinetics.