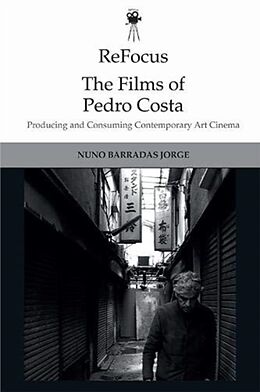 Refocus: the Films of Pedro Costa

Nuno Barradas Jorge is a Teaching Associate in Film and Television Studies in the School of Cultures, Languages and Area Studies at The University of Nottingham. He is the co-editor, with Tiago de Luca, of Slow Cinema (Edinburgh University Press, 2016). His work appeared in, among others, the journal Adaptation and in the anthologies Migration in Lusophone Cinema (Palgrave Macmillan, 2014) and Global Portuguese Cinema (I.B. Tauris, 2017).

This is the first English-language study of internationally acclaimed Portuguese filmmaker Pedro Costa, examining the cultural, production and exhibition contexts of his feature films, shorts and video installations. It situates Costa's filmmaking within the contexts of Portuguese, European and global art film, looking into his working practices alongside the impact of digital video, forms of collaborative authorship, and the intricate dialogue between modes of production and aesthetics. Considering the exhibition, circulation and reception of Costa's creative output in settings such as film festivals, the art gallery circuit and the home video market, ReFocus: The Films of Pedro Costa provides an essential critical analysis of this major filmmaker - as well as of the multifaceted production and consumption practices that surround contemporary art cinema. Nuno Barradas Jorge teaches in the Department of Cultural, Media and Visual Studies at the University of Nottingham. He is the co-editor, with Tiago de Luca, of Slow Cinema (Edinburgh University Press, 2016).

CHAPTER 3 - Digital Filmmaking at the Interstices

CHAPTER 5 - Between the Black Box and the White Cube

CHAPTER 7 - A 'Document of Documents': Authorship, Intertextuality and Politics in Horse Money (2014)