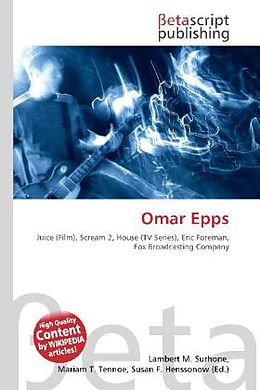 Please note that the content of this book primarily consists of articles available from Wikipedia or other free sources online. Omar Hashim Epps (born July 20, 1973) is an American actor and musician. He is famous for his movies Juice, Higher Learning, Love and Basketball, In Too Deep, and The Wood. He had a small role in Scream 2 and was a recurring character (Dr. Dennis Gant) on the US drama series ER. Since 2004, he has played the role of Dr. Eric Foreman on the Fox medical drama series House. Epps was born in Brooklyn, New York to a single mother who was a school principal and lived in several neighborhoods while growing up (Bedford-Stuyvesant, East New York and Flatbush). Before he started acting, he belonged to a rap group called Wolfpack which he formed with his cousin in 1991. He began writing screenplays at the age of ten and attended the Fiorello H. LaGuardia High School of Music & Art and Performing Arts.