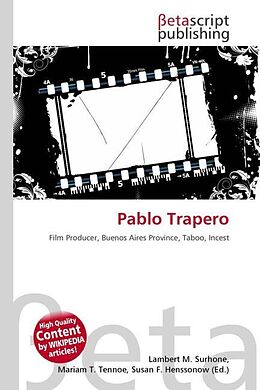 Please note that the content of this book primarily consists of articles available from Wikipedia or other free sources online. Pablo Trapero (Born 4 October 1971, in San Justo, Buenos Aires Province) is an Argentine film producer, editor and director.His movies are known for portraying the lives of ordinary people, and usually involving some form of social criticism to modern society, such as his movie Mundo Grúa (which portrayed the life of a migrant contract worker), or the highly-acclaimed El Bonaerense, which focused on the corruption and the lives of Buenos Aires Province police officers.