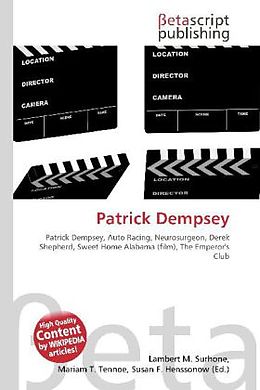 Please note that the content of this book primarily consists of articles available from Wikipedia or other free sources online.Patrick Galen Dempsey (born January 13, 1966) is an American actor and race car driver, known for his role as neurosurgeon Dr. Derek Shepherd ("McDreamy") on the medical drama Grey''s Anatomy. He has also recently appeared in several films, including Sweet Home Alabama, The Emperor''s Club, Freedom Writers, Enchanted, Made of Honor, and Valentine''s Day.Dempsey was born in Lewiston, Maine, and grew up in Buckfield, Maine, the youngest of three children born to Amanda and William Dempsey. He has Irish ancestry. Dempsey attended St. Dominic Regional High School for his senior year, where his mother worked as a secretary, but dropped out before he graduated. He was an adept juggler, tying for second in a national juggling competition.