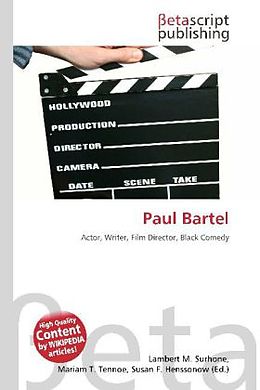 Please note that the content of this book primarily consists of articles available from Wikipedia or other free sources online. Bartel was born in Brooklyn, New York, the son of Jesse and William Bartel, who was an advertising executive. Bartel was openly gay; this influenced his career choice, as he found himself more accepted and afforded more opportunities within the independent film industry than he would have in Hollywood. Bartel directed 11 low-budget films, including two which attained modest celebrity: Eating Raoul (1982) and Scenes from the Class Struggle in Beverly Hills (1989), both of which featured co-star and fellow Brooklynite, Mary Woronov. Perhaps the most exiting preview of Bartel''s eccentric genius was the short film "The Secret Cinema" a paranoid delusional fantasy masterpiece of self referential cinema. Bartel and Woronov appeared together in 17 different films, including the 1975 cult film Death Race 2000, which he also directed; the 1979 cult classic Rock ''n'' Roll High School; and Joe Dante''s Hollywood Boulevard (1976). In the 1986 horror flick Chopping Mall, Bartel and Woronov reprised their characters from Eating Raoul.