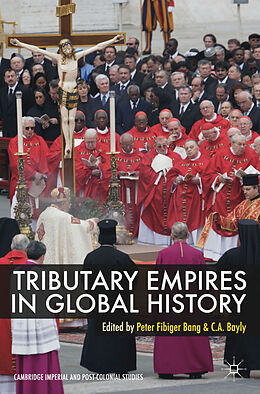 A pioneering volume comparing the great historical empires, such as the Roman, Mughal and Ottoman. Leading interdisciplinary thinkers study tributary empires from diverse perspectives, illuminating the importance of these earlier forms of imperialism to broaden our perspective on modern concerns about empire and the legacy of colonialism.

'this is an important volume that scholars will mine productively for the information most useful to their own lines of inquiry.' (Laura Hostetler, Journal of World History 2013

'This superb collection is to be warmly welcomed for taking a different approach. Most obviously, it provides a clear sense of the basic character of pre-industrial empires The contributors, justly celebrated as experts in their respective fields, write at the top of their form. Anyone wanting to understand the mechanisms of rule in premodern empires, and much more, would do well to start with this volume.' - John Hall, Journal of Interdisciplinary History

Inhalt
Figures and Maps Preface Notes on Contributors Tributary Empires: Towards a Global and Comparative History; P.F.Bang & C.A.Bayly PART I: HISTORIOGRAPHIES OF EMPIRE Religion, Liberalism and Empires: British Historians and their Indian Critics in the Nineteenth Century; C.A.Bayly Orientalism and Classicism: the British-Roman Empire of Lord Bryce and his Italian Critics; F.De Donno The New Order and the Fate of the Old: The Historiographical Construction of an Ottoman ancien régime in the Nineteenth century; B.Tezcan PART II: THEORETICAL PERSPECTIVES ON EMPIRE Empire as a Topic in Comparative Sociology; W.G.Runciman Early Imperial Formations in Africa and the Segmentation of Power; M.Tymowski Post-Nomadic Empires: From the Mongols to the Mughals; A.Wink The Process of Empire: Frontiers and Borderlands; D.Ludden The Emblematic Province: Sicily from the Roman Empire to the Kingdom of the Two Sicilies; G.Salmeri PART III: COMPARATIVE HISTORIES Lord of All the World: the State, Heterogeneous Power and Hegemony in the Roman and Mughal Empires; P.F.Bang Fiscal Regimes and the 'First Great Divergence' between Eastern and Western Eurasia; W.Scheidel Late Rome and the Arab Caliphate; C.Wickham Returning the Household to the Tributary Empire Model: Gender, Succession, and Ritual in the Mughal, Safavid, and Ottoman Empires; S.Blake Comparisons Across Empires: The Critical Social Structures of the Ottomans, Russians and Habsburgs during the Seventeenth Century; K.Barkey & R.Batzell Endnotes Bibliography Index