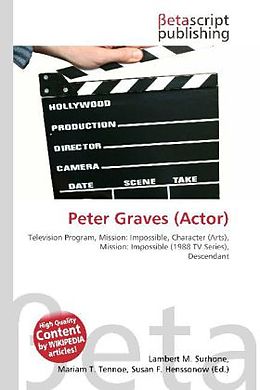 Please note that the content of this book primarily consists of articles available from Wikipedia or other free sources online. Peter Aurness (born March 18, 1926) known professionally as Peter Graves, is an American film and television actor. He is known for his starring role in the television series Mission: Impossible from 1967 to 1973, and its revival, from 1988 to 1990. Graves was born Peter Aurness in Minneapolis, Minnesota, the son of Ruth (née Duesler), a journalist, and Rolf Cirkler Aurness, a Norwegian who worked in business. Graves is a descendant of German and Norwegian immigrants. Graves is the younger brother of actor James Arness (Gunsmoke). Graves attended Southwest High School (Class of 1944) and the University of Minnesota, where he was a member of Phi Kappa Psi fraternity. Graves has been married to Joan Endress since 1950. They have three daughters: Kelly, Claudia and Amanda. They have six grandchildren.