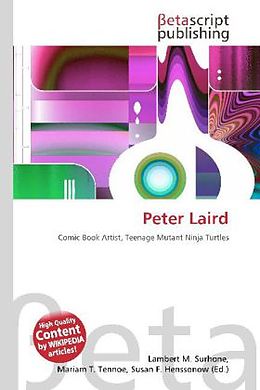 Please note that the content of this book primarily consists of articles available from Wikipedia or other free sources online. Peter Alan Laird (born January 27, 1954) is an American comic book artist. He is best known for co-creating Teenage Mutant Ninja Turtles in the fall of 1983 with Kevin Eastman. Peter Laird was born on January 27, 1954 in North Adams, Massachusetts. Toward the end of 1983, Laird was earning "the princely sum of ten dollars an illustration from a local newspaper in Northampton, Massachusetts." The following year, in May 1984, Laird and Kevin Eastman self-published the first black & white issue of Teenage Mutant Ninja Turtles, at an initial print run of 3000 copies for the forty-page oversized comic. It was largely funded by a loan from Eastman''s uncle, Quentin (which experience had a profund impact on Laird, and led indirectly to his later work with the Xeric Foundation), and published by the duos Mirage Studios, a name chosen because "there wasn''t an actual studio, only kitchen tables and couches with lap boards." That first issue received a number of subsequent printings over the next few years, as the Turtles phenomenon began to take off.