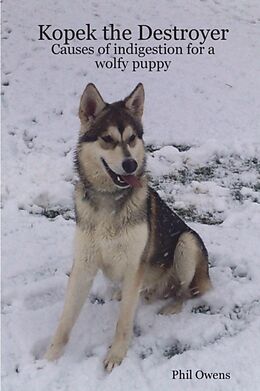 Phil and Ronnie started with two rabbits. Then along came Tim, a grouchy 11-year-old Border collie they adopted from the Blue Cross. Next, they acquired another rabbit, a guinea pig, yet another rabbit, and then a cat.

Now while Phil has had dogs all his life, they were in the main, older rescue dogs and Ronnie's experience was limited to Tim, who they only had for four years. Living with Tim introduced Ronnie to the joys of canine ownership, so when he went to the great field in the sky, it was a no-brainer to look for another dog. However, they decided to get a puppy. A puppy was a new experience for both of them, and an experience it certainly was. There were plenty of incidents to cope with, as their new puppy grew up, many of which contributed to the slow deterioration of their newly renovated home.