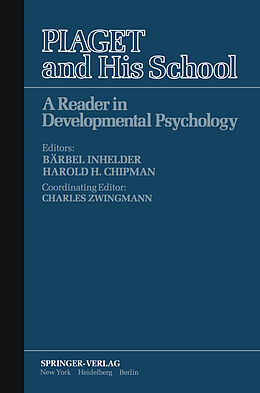 Piaget and His School

Inhelder in her introduction. The reason for this unity is that explanatory adequacy can be attained only by exploring the formative and constructive aspects of development. To explain a psychologic reaction or a cognitive mechanism (at all levels, including that of scientific thought) is not simply to describe them, but to comprehend the processes by which they were formed; failing that, one can but note results without grasping their meaning. JEAN PlACET VI Man distinguishes himself from other creatures primarily by his abstract reasoning capacity and his ability to communicate his knowledge by highly complex symbolic processes. What is called "humanity" and progress is to a large degree a measure of his consciousness and the deployment of his creative potentials. There are few scientists who have explored the universe of cogni tion, and contributed to the understanding of the realm of knowledge, with greater genius, care, and scientific intuition than Jean Piaget and his longtime collaborator Barbel Inhelder. Professor Inhelder and her assistant Dr. Harold Chipman realized this book in spite of the heavy load of research, teaching, and administra tive duties in a rapidly expanding Institute. It is therefore a particular pleasure for me to presen t this book.

Inhalt
One: Theoretical Aspects.- 1. Piaget's Theory.- 2. The Gaps in Empiricism.- 3. Information Processing Tendencies in Recent Experiments in Cognitive LearningTheoretical Implications.- 4. Biology and Cognition.- 5. The Affective Unconscious and the Cognitive Unconscious.- 6. The Development of the Concepts of Chance and Probability in Children.- Two: Experiments in Cognitive Development.- 7. Identity and Conservation.- 8. Memory and Intelligence in the Child.- 9. Information Processing Tendencies in Recent Experiments in Cognitive LearningEmpirical Studies.- 10. Operational Thought and Symbolic Imagery.- 11. The Sensorimotor Origins of Knowledge.- 12. The Development of Systems of Representation and Treatment in the Child.- Three: Developmental Approach to Language.- 13. Developmental Psycholinguistics.- 14. Epistemology and the Study of Language.- Four: Psychopathology.- 15. Some Pathologic Phenomena Analyzed in the Perspective of Developmental Psychology.- 16. Operatory Thought Processes in Psychotic Children.- 17. The Cognitive Mechanisms Underlying Problem-Solving in Psychotic and Mentally Retarded Children.- Five: Cross-Cultural Research.- 18. Need and Significance of Cross-Cultural Research in Genetic Psychology.- 19. Piaget's Theory of Cognitive Development and Individual Differences.- References.- Author Index.

Titel
Piaget and His School

Untertitel
A Reader in Developmental Psychology