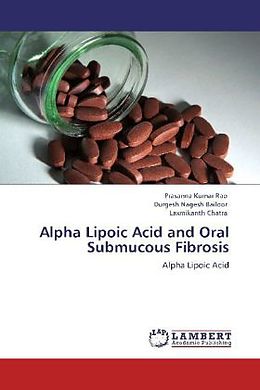 Alpha-lipoic acid is a sulfur-containing substance that is readily converted to and from its reduced form, dihydrolipoic acid. Alpha-lipoic acid acts as a coenzyme in reactions that occur in the Krebs cycle; specifically it is involved in the decarboxylation of pyruvate and some other alpha-keto acids. It may well be the perfect antioxidant. Alpha-lipoic acid has researched for use in the treatment of HIV and diabetes Because it dissolves in both water and fat, this so-called "universal antioxidant" is able to scavenge more wayward free-radical cells than most antioxidants, the majority of which tend to dissolve in either fat or water but not both. Alpha-lipoic acid can reach tissues composed mainly of fat, such as the nervous system, as well as those made mainly of water, such as the heart. The body makes small amounts of alpha lipoic acid.

Dr Prasanna Kumar Rao J is currently working as Reader in the Department of Oral Medicine and Radiology at Yenepoya Dental College, Yenepoya University, Mangalore. He has to his credit, 40 international and national publications and a reviewer for 10 international journals. He is the Editorial Board Member of Journal of Bioscience and Medicine.