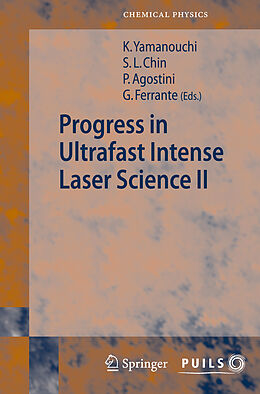 The world is ?lled with light, and, no doubt, we have developed our idea of nature by seeing matters, that is, by irradiating matters with light. When increasing the intensity of light, we realized recently that a variety of new and hitherto unimaginable phenomena emerge. In rapid succession, abo- threshold ionization, Coulomb explosion, selective chemical bond breaking, high-order harmonic generation into deep XUV, generation of short-pulsed ?18 X ray, ?lamentation, and light-pulse shortening into the attosecond (10 s) time domain have been reported. Light has gained a new function which is to change the character of matter itself and the consequences have triggered a lot of enthusiasm, discussions and collaborations among the researchers. A series of annual meetings, International Symposium on Ultrafast - tense Laser Science (http://www.isuils.jp), with which this new Springer sub-series collaborates, was designed to stimulate further interdisciplinary interactions at the forefront of research aiming at expanding the frontiers of the ?eld. The ?rst ISUILS was held in Tokyo in 2002, featuring the issue of control of molecules in intense laser ?elds, and the second ISUILS was held the next year in Quebec City. From this ISUILS2, we started honoring distinguished researchers who have contributed to the establishment of the basis of this new research ?eld. Prof. Hiroshi Takuma (Tokyo) and Prof. G- ard Mainfray (Saclay) served as Honorary Co-chairs at ISUILS2, and Prof. Leonid Keldysh (Moscow) and Prof. Orazio Svelto (Milano) at ISUILS3 held in Palermo in 2004.