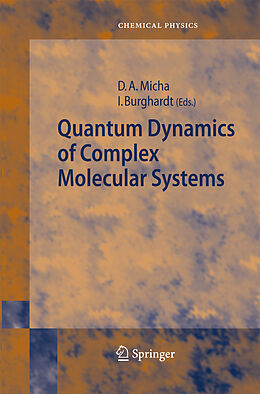 Quantum phenomena are ubiquitous in complex molecular systems - as revealed by many experimental observations based upon ultrafast spectroscopic techniques - and yet remain a challenge for theoretical analysis. The present volume, based on a May 2005 workshop, examines and reviews the state-of-the-art in the development of new theoretical and computational methods to interpret the observed phenomena. Emphasis is on complex molecular processes involving surfaces, clusters, solute-solvent systems, materials, and biological systems. The research summarized in this book shows that much can be done to explain phenomena in systems excited by light or through atomic interactions. It demonstrates how to tackle the multidimensional dynamics arising from the atomic structure of a complex system, and addresses phenomena in condensed phases as well as phenomena at surfaces. The chapters on new methodological developments cover both phenomena in isolated systems, and phenomena which involve the statistical effects of an environment, such as fluctuations and dissipation. The methodology part explores new rigorous ways to formulate mixed quantum-classical dynamics in many dimensions, along with new ways to solve a many-atom Schroedinger equation, or the Liouville-von Neumann equation for the density operator, using trajectories and ideas related to hydrodynamics. Part I treats applications to complex molecular systems, and Part II covers new theoretical and computational methods