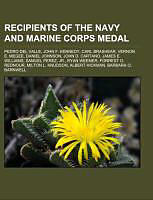 Recipients of the Navy and Marine Corps Medal

Source: Wikipedia. Pages: 27. Chapters: Pedro del Valle, John F. Kennedy, Carl Brashear, Vernon E. Megee, Daniel Johnson, John D. Cartano, James E. Williams, Samuel Perez, Jr., Ryan Weemer, Forrest O. Rednour, Milton L. Knudson, Albert Hickman, Barbara O. Barnwell. Excerpt: John Fitzgerald "Jack" Kennedy ·) (May 29, 1917 - November 22, 1963), often referred to by his initials JFK, was the 35th President of the United States, serving from 1961 until his assassination in 1963. After military service as commander of the Motor Torpedo Boat PT-109 and Motor Torpedo Boat PT-59 during World War II in the South Pacific, Kennedy represented Massachusetts's 11th congressional district in the U.S. House of Representatives from 1947 to 1953 as a Democrat. Thereafter, he served in the U.S. Senate from 1953 until 1960. Kennedy defeated then Vice President and Republican candidate Richard Nixon in the 1960 U.S. presidential election. He was the youngest elected to the office, at the age of 43, the second-youngest President (after Theodore Roosevelt), and the first president to have been born in the 20th century. Kennedy is the only Catholic president, and is the only president to have won a Pulitzer Prize. Events during his presidency included the Bay of Pigs Invasion, the Cuban Missile Crisis, the building of the Berlin Wall, the Space Race, the African American Civil Rights Movement and early stages of the Vietnam War. Kennedy was assassinated on November 22, 1963, in Dallas, Texas. Lee Harvey Oswald was charged with the crime but was shot and killed two days later by Jack Ruby before any trial. The FBI, the Warren Commission, and the House Select Committee on Assassinations (HSCA) concluded that Oswald was the assassin, with the HSCA allowing for the probability of conspiracy based on disputed acoustic evidence. Today, Kennedy continues to rank highly in public opinion ratings of former U.S. presidents. John Fitzgerald Kennedy was born at 83 Beals Street in Brookline, Massachusetts on Tuesday, May 29, 1917, at 3:00 pm, the second son of Joseph P. Kennedy, Sr., and Rose Fitzgerald; Rose, in turn, was the eldest child of John "Honey Fitz" Fitzgerald, a prominent Boston political figure who was the city's mayor and a three-term member of Congress. Ke

Titel
Recipients of the Navy and Marine Corps Medal